The Story of a Person Who Pushed to Open

✖
☰MENU
Read our COVID-19 guidelines by clicking this banner before visiting one of our parks. We are monitoring our operations to prevent the spread of COVID-19 and this page is updated as adjustments are made. 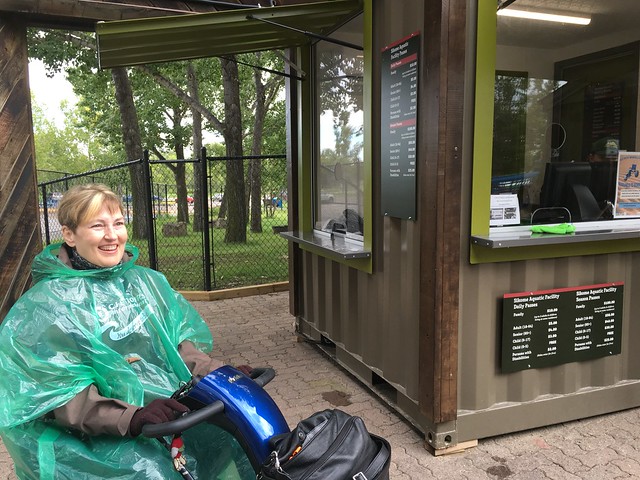 "I have tried to tell people about the 2008 Alberta Access Challenge Weekend in Peter Lougheed Provincial Park. I have had difficulty expressing myself, just as I did on the last day of that weekend. When talking to friends, the phrase, 'You had to be there.' came out of my mouth. Even now I seem to find it hard to put into words the change this weekend has brought to me.

In describing the activities for the weekend, many said, 'Good for you!' or some response. I kept trying to say, 'No, but you don't understand!' They would nod in an interested manner. But they did not understand. I am sure they want to.

For years I have been trying to do activity that was inclusive and comfortable for me. Granted, many of the fears and discomforts holding me back were of my own making.

When one has been pushed to the periphery, 'benched,' pushed aside, ignored, and told they better sit out, it is beyond comprehension that there would be a time when you could try things without criticism, with goodhearted competition, and with acceptance. I assume the people who have always been active in their childhood would have less problems feeling at ease in new and competitive activities. Many participants of the Access Challenge Weekend were active prior to their present state. My impression was that they are still active and a weekend such as this brought them back their former activity level.

As a child, before I allowed people to put restrictions on me, I was constantly in the forest behind our house. I would walk with my dog for miles and look for flora and fauna. I would go to the beaver dam and check out how the building was going; along the way I would pick blueberries. In essence, I was just enjoying nature and the quiet solitude that brings peace to one's soul. I missed that as I grew up, took on responsibility, and had to go to college.

From my perspective, not coming from a background of group activity and support in activities in general, the Alberta Access Challenge Weekend made me see there was a way to become more involved in those things I used to love to do. I realized that I didn't have to do it alone as I have always tried. I can leave some of my fears and painful memories out in the wilderness and let them fend for themselves. I can move on to enjoy the outdoors, try new things, and meet like-minded individuals.

This weekend was a pilot project to initiate more awareness for the general public, government, and people with disability. It was a challenge for social change as much as for policy change. However, it ended up being much more than that for me.

I didn't expect it to become a personal challenge. One that made me look at the painful memories that have held me back, as well as acknowledging those restrictions I had placed on myself. I learned again that I have to allow other people to help me to achieve my goals, just as a team wins a championship.

It not only gave me access to the beautiful country in Kananaskis, to new outdoors activities, but also to myself." - Cecile Buhl