The first University of Alberta field crew to excavate dinosaurs worked in what is now Dinosaur Provincial Park in 1920.

Some of these early specimens that were collected and prepared by George Sternberg are on display in the Museum of Paleontology in the basement of the Earth and Atmospheric Sciences Building.

Dinosaurs collected in later years are on display in the Halls of the Biological Sciences Building, or are housed in the University's enormous collections that are kept for research and teaching.

In the last few years, university field crews have given most of their attention to inaccessible areas of Dinosaur Provincial Park that have not been as well explored.

The results have been very rewarding, and in 2009 included a new ornithomimid (ostrich-mimic dinosaur) skeleton from the north side of the Red Deer River.

Once the ornithomimid (ostrich-mimic) skeleton was covered with a protective cap of plaster and burlap, the specimen was undermined in preparation for turning the block over by U of A field crew members Bill Spencer (Calgary), Ariana Paulina Carabajal (Argentina) and Clive Coy (Edmonton). Photo by Philip J. Currie.
Like many dinosaur skeletons found in the Park, the specimen was found with the neck pulled backwards over the shoulders, and the tail curving forward to overlap the head and neck.

This characteristic death pose is caused by the muscles along the backbone contracting as they dried out. The skull of the ornithomimid was not seen when the specimen was excavated, but is hopefully still encased in the rock. It will take several years to finish preparation of this specimen in the University labs.

The other major specimen collected in 2009 was a Gorgosaurus libratus skeleton that had been found and partially excavated in 2008.

This specimen is a half grown individual that would have been four to five metres long at the time of its death, and would have been in its teenage years. Unlike the adults, immature specimens of Gorgosaurus were long-limbed and lightly built, and were probably agile, fast and aggressive.  The skull of this animal will be prepared over the winter months in Edmonton.

Plans for the 2010 Dinosaur Park field season will involve three main objectives that will again focus mostly on the regions of the Park that have not been prospected as intensively as the core area: 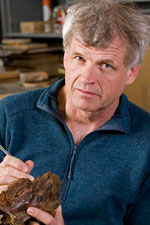