During the last week of May and the first three weeks of June, the University of Alberta crew returned to work the northeastern corner of Dinosaur Provincial Park.

Excitement ran high because at the end of 2010 season  a promising specimen had been found in that area by long time volunteer, Stuart Plotkin from New York.

There was a considerable amount of rock to move in order to expose the specimen, and consequently the work was delayed until 2011. The work started by removing several metric tons of overburden; fortunately, most of the rock turned out to be relatively soft sandstone, although just above the bone it became hard. Nevertheless, it took several days to cut down to the bone layer.

The results were anything but disappointing; some of the first elements uncovered showed us that the skull was present, likely that of a large carnivore. At the same time the entire pelvis was found in another part of the quarry.  It took many days to separate the densely-packed bones into blocks that were small enough to carry out of the badlands.

When people were not busy in the quarry, they were prospecting for specimens newly exposed by erosion.  Almost a hundred individual fossils were collected and are now catalogued into the collections at the University of Alberta Laboratory of Vertebrate Paleontology (UALVP).

It would an understatement to say the 2011 field season was a little "damp", with many spectacular thunderstorms that made walking in the badlands difficult. However, weather like this is always good for fantastic photographs of the river valley and it often exposes fossils for future discovery. Although the rains slowed our progress, we managed to drag most of the plaster and burlap jacketed bones back to camp, where they were loaded on a truck for the five hour drive north to Edmonton.

The only field jacket we could not remove was the largest one, containing the pelvis.  This block weighed more than 400 kg (850 lb) and was too big for our already overloaded vehicle. So we decided to leave it until we had a plan to extract it safely from the badlands.

It was December 13th before we made it back, and by then the prairie and badlands were covered with 15 cm of fresh snow. To make matters worse, the whole region was enveloped in dense ice fog. The poor visibility would have made it impossible for the Calgary-based Bell 407 helicopter to lift the specimen out of the badlands up to the valley rim. Fortunately the fog burned off shortly before the project was scheduled to start, and the pilot from Alpine Helicopters was able to lift the cargo net into a crisp, blue sky.

At prairie level, a truck was waiting for our precious load, which was lowered gently into the open box. The entire operation, sponsored by the Dinosaur Research Institute (Calgary), was completed so quickly we barely had time to admire the astoundingly beautiful snow-covered badlands under those famous Alberta-blue skies!

As for the specimen, it is already being freed from the last of the rock and plaster. It is turning out to be a fine skull and skeleton ofDaspletosaurus, a three- or four-tonne monster that was probably the direct ancestor of the famousTyrannosaurus rex! 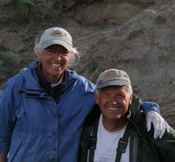