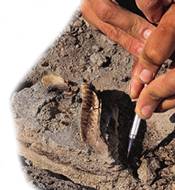 In 2004, the Royal Tyrrell Museum continued its work in the park with a focus on vertebrate microfossil sites. These sites are an importance source of information on ancient communities because they contain large numbers of elements from many different kinds of animals. One of the goals of this work is to understand the aquatic communities. Through past studies we have learned that some of the fish that lived in the Cretaceous are very similar to fish currently living in the Red Deer River, like the goldeye and the pike. With more material, we hope to recognize others.

In addition, the Tyrrell Museum field parties worked with the Australian Museum to collect part of a ceratopsian bone bed. Blocks containing many tens of bones and weighing many hundreds of kilograms were isolated. Removing large blocks is always a challenge. A local oil service company, Lonkar Services, solved the problem by donating the services of a winch truck with seven kilometers of cable.

Each year, fieldwork includes an ongoing survey of the fossil resources of the park. Often in the process significant fossils are found. The highlight of 2004 was a nearly complete skull of the ceratopsian dinosaur Styracosaurus. Only the snout was visible at first, but as we uncovered it, we found that nearly the entire skull is preserved.

This year, work on the vertebrate microfossil sites will continue. As well, excavating the Styracosaurus skull found last year will be one of our first priorities. A book on research in Dinosaur Park will be published in August as part of the celebration of the park's 50 th anniversary and a symposium on the paleontology of Dinosaur Park is being planned for September in conjunction with publication of the book. It looks like 2005 promises to be a big year for research in Dinosaur Park.