The Royal Tyrrell Museum of Palaeontology’s 2014 fieldwork in Dinosaur Provincial Park was led by Dr. Caleb Brown, Postdoctoral Fellow at the Museum. Last summer saw a return of a large-scale Royal Tyrrell Museum field crew made up largely of Museum technicians and graduate students from the University of Toronto and the University of Calgary, with a field season spanning from mid-June to August.

The 2014 program mainly concentrated on the excavation of two different Centrosaurine (horned dinosaur) bonebeds. These bonebeds are layers of rock with high concentration of the skeletons of many individuals, often of the same species, and are interpreted as mass-death events of herds. By excavating these bonebeds, we can learn important information about the growth, variation, and behaviour of these dinosaurs.  Particularly important about Centrosaurs are their horns (one on the nose, and one above each eye) and the bones of the frill (the boney shield at the back of the skull).

The two bonebeds we excavated this year were Bonebed 42, which preserves the horned dinosaur Styracosaurus, and Bonebed 180,  which contains a close relative Centrosaurus. (Work by the Royal Tyrrell Museum in 2014 was the first time this location was excavated).  Some of the more significant material collected from these sites included a partial frill and juvenile orbital (eye) horn of Styracosaurus from Bonebed 42, as well as many horns and a sub-adult frill of Centrosaurus from Bonebed 180. This horned dinosaur research program also makes effective use of fossil material collected by the Guided Excavation Program, run by Alberta Parks, where members of the public can assist in the excavation of another horned dinosaur site Bonebed 30.

In addition to collecting the fossil bones, mapping out the pattern of where the bones are preserved is important and can reveal how a bonebed was created. We experimented with new mapping technology: high resolution (1 centimeter accuracy) GPS, which allowed us to map out individual bones digitally and in 3-D. We also tested the use of Unmanned Aerial Vehicles (UAV), more commonly known as drones, to help survey and map bonebeds and put them in their geological context.

We also spent time prospecting for new fossils and new potential excavations for the 2015 field season. Some of the more exciting finds from last summer include the maxilla (upper jaw) of a juvenile tyrannosaur, as well a partial plesiosaur (marine reptile) skeleton. Together, the Museum collected more than 300 fossil specimens from Dinosaur Provincial Park in 2014.

Plans for the 2015 field season include on-going work in ceratopsian bonebeds, as well as collection of a hadrosaur (duck-billed dinosaur) skull that was found by students of Queen Mary University of London during their September field course in the Park.

Finally, in the 2014 field season, we began live-tweeting from our digs and discoveries in the field. You can follow our updates from last year and the upcoming 2015 field season program at 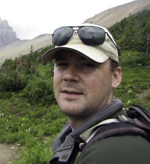